'I think it was unfortunate that he was seen in a hospital setting not wearing a mask, because I think this hospital, like every hospital, encourages people to be wearing masks, not just in wards but in the hospital as a whole.'

Replying to a complaint about Mr Johnson appearing without a mask in a photo, Northumbria NHS said on social media: 'Please be assured that infection prevention and control remains an utmost priority for our trust.

'The Prime Minister, Boris Johnson, followed strict measures, including wearing a mask, in each clinical area he visited.'

But he insisted the Prime Minister had followed the rules on his visit, telling the BBC: 'I know the Prime Minister took the advice on the clinical setting that he was in and followed all the protocols and procedures that were applied there and that's what everyone should do.' 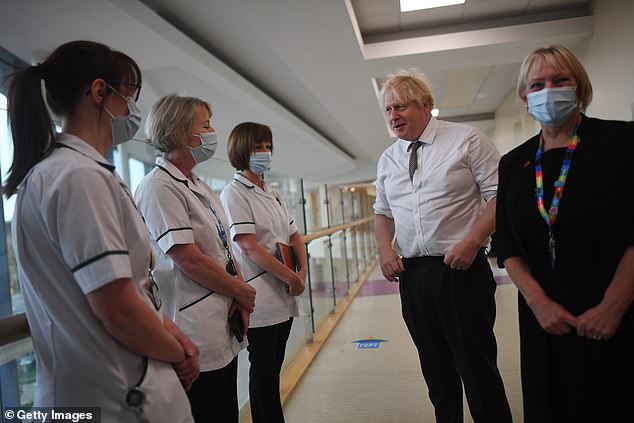 Asked about the guidance specifically and whether that meant he was not following the rules, Mr Raab said: 'No, precisely because, as you said, in the settings where it was required he did wear a mask.'

Questioned by reporters on whether Mr Johnson had broken the rules, the Prime Minister's official spokesman said: 'During a hospital visit, we always make sure we abide by the rules set out.

'He will have been abiding by the rules in place.'

It is the second time in the past eight days that No 10 has had to field questions about Mr Johnson's mask wearing habits.

Last week, his official spokesman was asked why the Conservative Party leader had opted not to cover his mouth and nose when sat next to renowned natural historian and broadcaster Sir David Attenborough, who is 95 years old, at the UN Cop26 climate summit in Glasgow.